Words have power, even before they’re spoken. 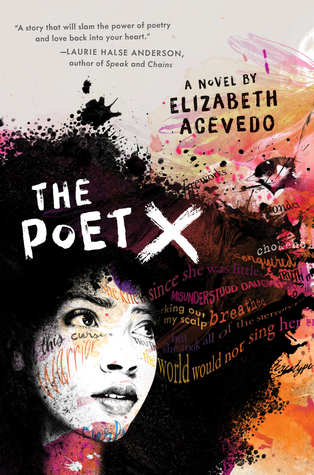 Xiomara Batista is many things – high school student, twin to Xavier, never quite good enough daughter, and closet poet. She’s being raised in a strict religious household by a mother who really wanted to be a nun and dad whose idea of being a good father is to close off his past life, stay silent and go along with mom. Xiomara is dealing with a lot – questioning her connection to the religion her mother forces on her, trying to be a good friend and ally to her brother who has secrets of his own, dealing with the unwanted attention men feel free to aim at her womanly body, and despite her mother’s harsh lectures about the dangers of dating, accepting that there’s nothing wrong with being attracted to boys. Her only outlet is her poetry; she writes it just for herself, trying to make sense of her thoughts and feelings. Eventually she’s persuaded to join the Spoken Word Poetry Club at school and, with the support of new friends, gains the confidence to share her words. After her first performance at an open mic everything changes. Xiomara’s journey is difficult but she learns how to live within her family while still being herself. Now, she understands that her words serve as both armor and weapon.

This book’s story in verse format serves the narrative very well, successfully making what looks spare on the page truly dense in meaning. The weaving of the overall story with Xiomara’s poetry is emotional, heartbreaking, joyous and powerful. Fully rooted in her Dominican culture, Elizabeth Acevedo paints a moving picture of this young woman, working to filter all the messages directed at her, on her way to discovering her true self.

One thought on “The Poet X”